In August 2022 a 5 metre tall puppet girl visited Crawley and over 30,000 people took part in or witnessed the event. Watch the film about the project here:

Read a report about the event here: Aura’s Odyssey report by Creative Crawley

THIS IS A PAST EVENT

Aura is a 5 metre high puppet created by Yorkshire based Animated Objects Theatre Company who visited Crawley in August as part of her odyssey in the UK. Crawley welcomed her with open arms, sharing stories, music, dance and art with her as she travelled around the town from 11 – 14 August 2022 as part of the Enliven: You’re Welcome season funded by Crawley Town Centre BID, Arts Council England and Crawley Borough Council.

We celebrated the welcoming and diverse nature of Crawley and its residents and the 75th anniversary of the new town with this art project.

Read on to discover how Aura’s story unfolded in Crawley…

Aura toured Crawley on an open-top bus taking in Maidenbower Park, Bewbush West Playing Field and Manor Royal Business District on her route. Members of the public brought along a picnic and waved hello to Aura. 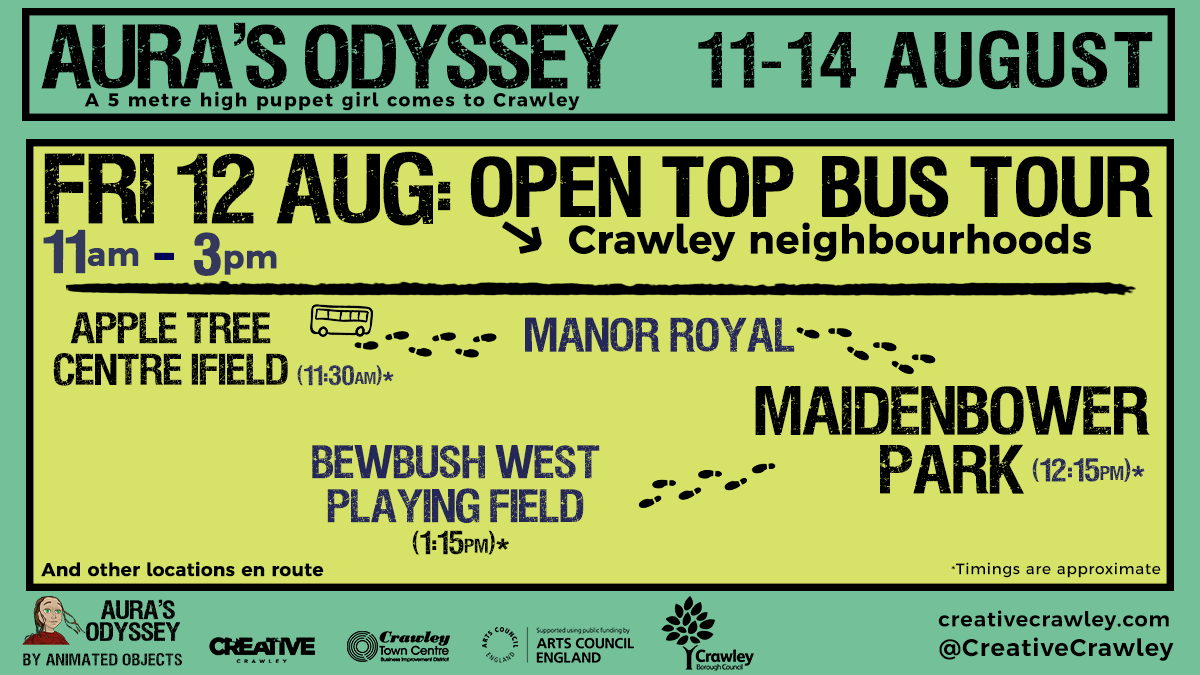 11am: The live band at the Brewery Shades welcomed Aura to start her journey up the High Street

11.30am: The Comic Shop presented a giant comic book to Aura made by local people

11.35am: Bloco Do Sul samba band led Aura to Queens Square via The Broadway stopping to greet people

1pm – 2.30pm: Aura had her lunch in Memorial Gardens and watched Crawley Festival musicians and dancers on the bandstand. She was given membership to Crawley Library with a giant library card. Audiences were invited to take part in dance and visual art workshops by Anna Des Clayes and Lorraine Yu or experience digital artwork from Bright Black. You could also have taken part in a Belonging workshop by Crawley Museum, you could have learned more about Crawley Pride or listened to children’s stories inspired by Aura from Crawley Library.

We invited audiences to bring an international picnic to share food from their cultures.

3pm: Aura made her way to County Mall up the Martletts where she was presented with a giant blanket made by local people. She was then sung a lullaby written by local mothers and Murmuration Arts theatre company. 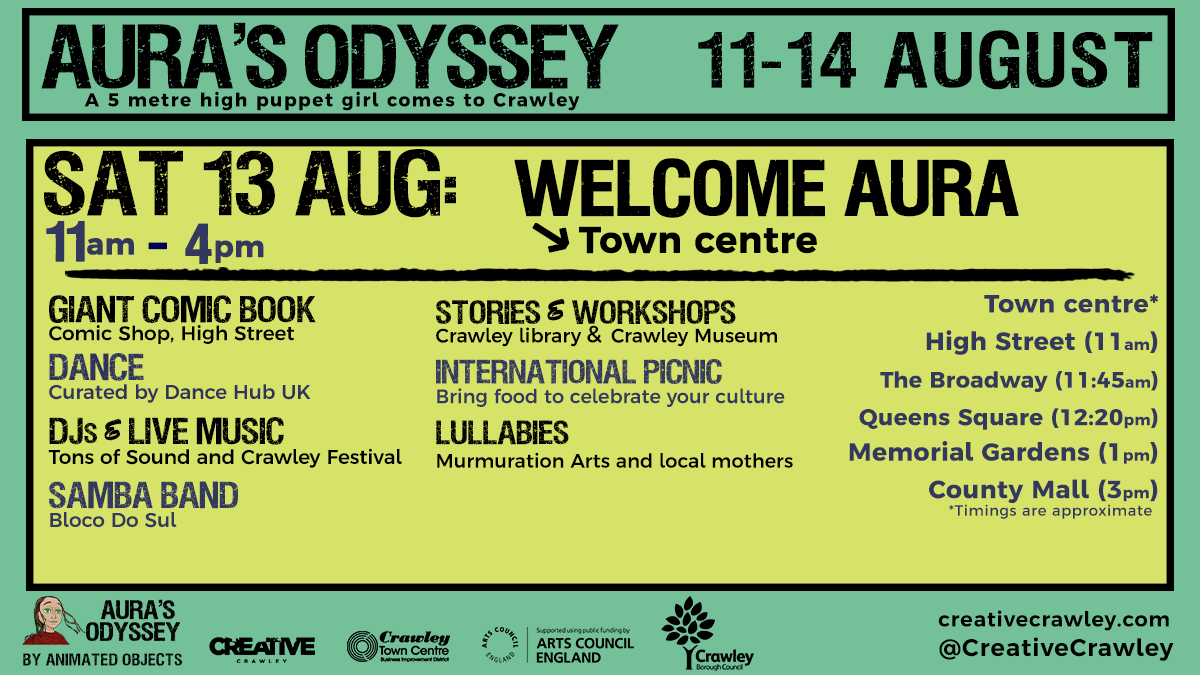 We waved goodbye to Aura at Tilgate Park where she was joined by AudioActive’s Kustom Vibes live music stage with acts from emerging local artists in partnership with Crawley Community Youth Service. There was also an exhibition of digital art made by local young people and members of the Chagossian community of Crawley by BRIGHTBLACK. Find out more here.

We welcomed Crawley residents to greet her on her journey around Crawley. 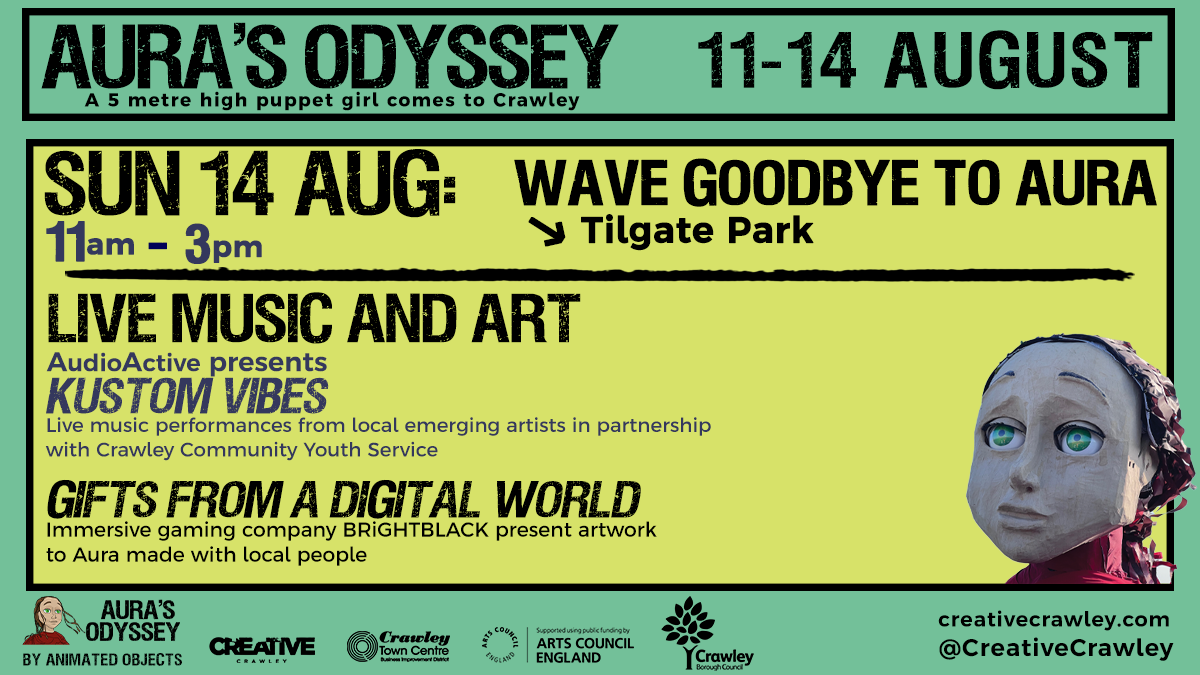 The public could access information on how to greet Aura HERE: HELP US WELCOME AURA TO CRAWLEY

Aura’s Odyssey is an epic reinvention of the story of the Trojan Wars made by Yorkshire based Animated Objects Theatre Company. It was originally commissioned by the Yorkshire Coast BID and Aura first arrived as a survivor of the Trojan Wars on the Yorkshire coast in April and May 2022. The next chapter in her odyssey saw her visit Crawley, the only other place outside Yorkshire that she visited in 2022.

You can find out more about Animated Objects Theatre Company and how Aura was made here.

Check out our news page for the BACKSTAGE WITH AURA’S ODYSSEY SERIES where you can find out more about some of the people involved in the project.

Aura in the news

Read about how outdoor culture can improve urban life in an article by Louise Blackwell, Creative Director of Creative Crawley in City Monitor (part of the New Stateman group) here.

Read about why Animated Objects brought Aura to Crawley in Reviews Hub here.

Read more about how we are celebrating Crawley in Art UK here.